Diving the Galapagos: all a diver could ask for! 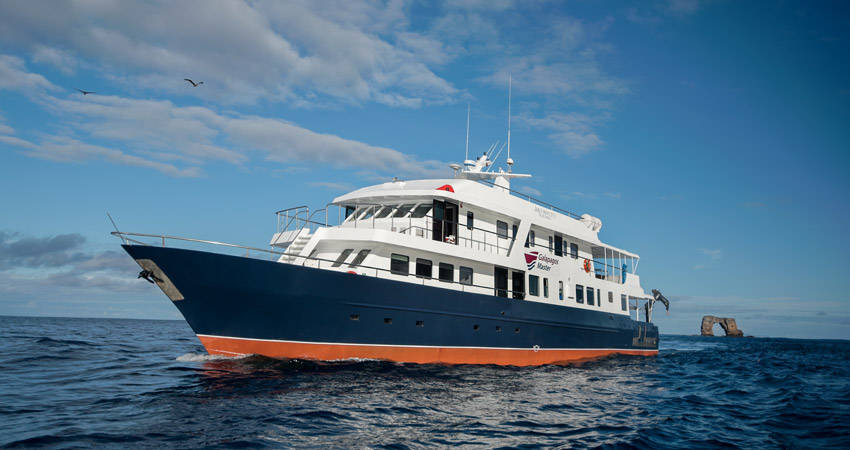 The Galapagos Master welcomed aboard a group of German divers for a week of unforgettable diving. After greeting everyone with a drink and making sure everyone was comfortably settled into their cabins, Cruise Director Juan Carlos (JC) briefed the guests on what to expect from their Galapagos experience, both in and out of the water. A short while later, we donned our gear for an easy check dive. This was a great chance to fine tune their buoyancy, practice deploying their submersible marker buoys and get a quick glimpse of a playful sea lion or two. It was also the first opportunity for our guests to sample Chef Angel’s otherworldly hot chocolate and hors d’oeuvres, served on deck right after the dive.
All of our guests seemed comfortable, confident and excited to take on the more challenging dives to come. Onward to the island of Santa Cruz!

First on our schedule today was Punta Carrion. Hammerhead sharks, a Galapagos shark, a white tip reef shark, a manta, a mobula ray, an eagle ray, a marble ray and, for those inclined to look for the small stuff, literally thousands of nembrotha nudibranchs. We even enjoyed the company of a few sea lions, who were keen to pose for photographs and show off their underwater barrel rolls.
A short surface interval later, we were back in the water at Isla Moscera for another brilliant dive. Mobula rays, green turtles, a huge manta and 15 – 20 hammerheads were the highlights this time.

With two dives under our weight belts, we turned our attention to topside exploration at Seymour Norte. As soon as we arrived on the island, we were greeted by an enormous iguana lazing in the shade. A few paces later, we came upon a colony of frigate birds nesting just a meter from the walking path. An equally close-up visit with a blue footed booby wrapped up the island tour. No matter how much time we spend in the archipelago, we will never cease to marvel that, in the modern world, it is still possible to have encounters with wild animals that seem to take no notice of our presence. Absolutely wonderful day!
But as fascinating as the terrestrial creatures of Galapagos may be, our guests were already looking forward to the next dive. Lucky for them, our next site was one that should be near the top of every serious diver’s bucket list….the legendary Wolf Island.

To take advantage of the better light and higher activity levels associated with morning dives, we shifted our day’s schedule to the early side, three dives before lunch and one dive in the late afternoon.  This proved to be a wise decision.  On our first dive, at a site called Landslide, there were scalloped hammerheads everywhere, 5-7 at a time at the beginning of the dive, 20-30 at a time toward the end.  Determined to strike while the iron was hot, we returned to Landslide for our second dive and found the site again bustling with shark activity.

As the sun moved higher in the sky for our third and fourth dives, we still had plenty of encounters with hammerheads, green sea turtles and, on our final dive of the day, a dolphin!  Comfortable conditions and lots of marine life…there’s not much more a diver could ask for.    In the meantime, we moved on to perhaps the most iconic dive site in the entire Galapagos archipelago, Darwin Island.

Spirits were high on the dive deck as our divers prepared their gear with Darwin’s Arch beckoning in the distance. To keep a bit of space between our two dive groups, we decided that one group would drop in at the Theater, while the other would drop in at the sandy bottom. We had the dive site to ourselves so there was no need to crowd together.
The 40-meter visibility ensured that we saw everything there was to see: 10 or so hammerheads, a school a barracudas, rainbow runners, and a few yellowfin tunas on the first dive; 30 hammerheads plus a dolphin on the second dive; a few more hammerheads on the third dive; and golden cowrays and more yellowfins on the fourth dive. As we raised the Pilsens at dinner that evening, there were smiles all around.

For our return to Wolf, the scene was familiar: hammerheads zipping by while our divers hunkered down behind the rocks and boulders, trying to remain as still as possible.  The highlight of this day, however, was a pod of 30-40 dolphins which passed through both dive groups at a depth of about 10 meters.  It’s not unusual to glimpse dolphins at a distance, or to see a few up close, but to have so many dolphins, including juveniles, passing to the left, right, above and below is the kind of experience that makes even veteran divers pump their fists with excitement.  Great stuff, Mother Nature!  Please keep it coming.

The following morning we arrived at Punta Vicente Roca on the island of Isabela.  As soon as the first light peeked over the horizon, the area around our anchorage came to life as Galapagos penguins, flightless cormorants and sea lions all began to stir.  Underwater, the action was even better.  At one point, we had no fewer than six mola molas within clear sight.  A few sunfish, too caught up in the pleasures of a cleaning station to pay attention to much else, even drifted within a couple meters of one of our guests.  Add in a few sea lion encounters, a half dozen mobula rays and a Galapagos Bullhead Shark and you have the recipe for another tremendous day of diving in Galapagos.

Back on board, the saloon was abuzz with divers exchanging video footage. Without question, this was a day that will have a special place in our divers’ You Tube channels and personal highlight reels. With only two dives left on our itinerary, and the bar set at a vertiginous height, we bid adieu to Isabela and made our way to Cousins Rock.
The highlight of our last day of diving was a school of 25-35 eagle rays that came close enough to pop our bubbles with their tips of their wings. A great way to end a great week!
The last day of diving is always bittersweet. When each dive is better than the one before, you wish you could stay an extra day/week/month. Sadly, the time has come for our German friends to say farewell. We wish them good health and safe travels.
But for the crew of the Galapagos Master, the diving continues. Tomorrow, we welcome a new group of divers embarking on a new set of adventures. What do the waters of the Galapagos archipelago hold for them? Tune in next week to find out.